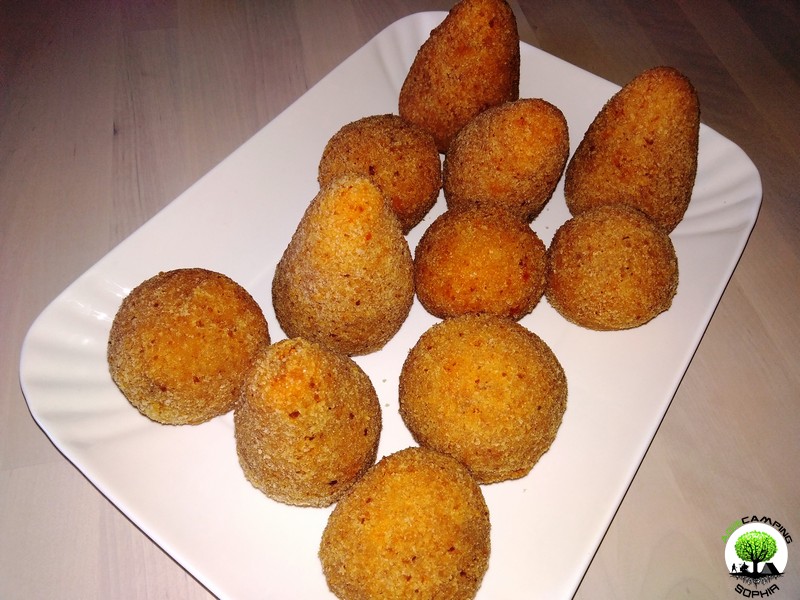 ARANCINO/A AND PAROCHIALISM
The main Sicilian cities seem ill with a chronic syndrome of superiority compared to the others. Each decant has its oldest and most resounding origins, a greater historical importance and a more authentic Sicilianity. This rivalry translates in most of the cases into a funny folklore.
Browsing the web I came across a series of articles about the diatribe about the genre of the Arancino : it seems that, at least on the net , both a matter of much debate. At the same time I found myself on the screen the photo of the fashion blogger Chiara Ferragni in order to taste a arancino in Taormina together with her boyfriend, the famous rapper Fedez. This is an instagram post in which he defines the arancini one of his favorite dishes. Below this picture, a string of insults by supporters of the feminine declination of the Sicilian dish... 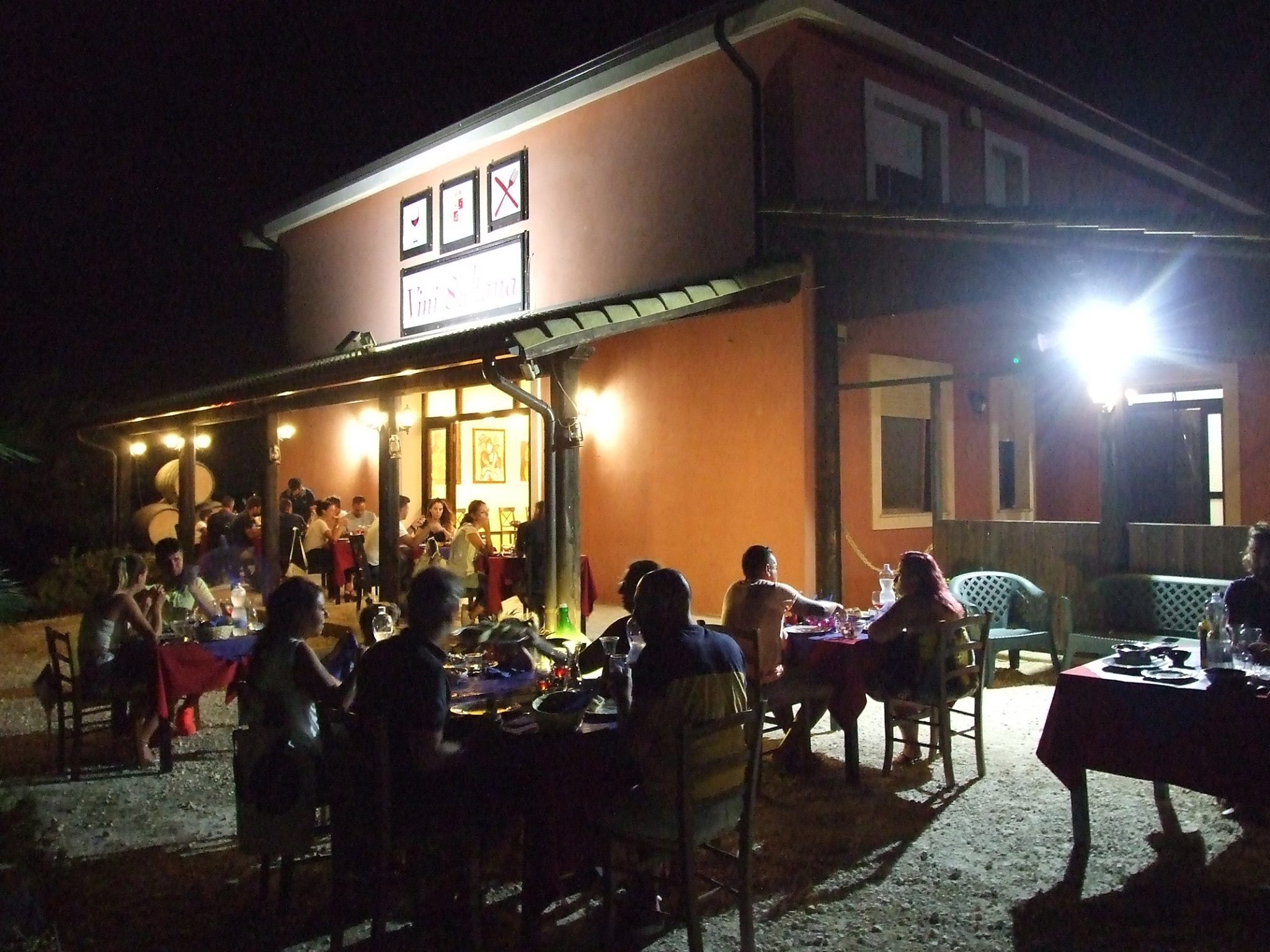 VINI SULTANA PRESENT THE...MENU SOPHIA!
Vini Sultana dedicates to the guests of Agricamping Sophia a menu of local products, with a delicious first and a sweet Sicilian, accompanied by the quality of their own wine.
Only 15 euros per person, for lunch only, here is the Sophia Menu:

WINES (in carafe) chosen from: 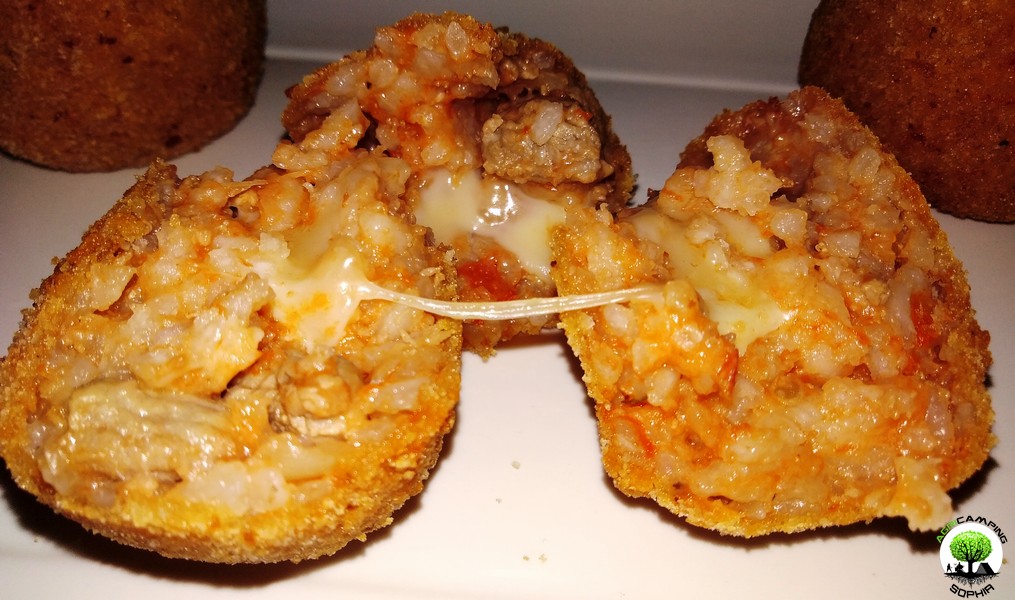 ARANCINO WITH MEAT SAUCE: MY VERSION.
If you live in Sicily you know: half of the chats between friends and relatives is about eating well. We talk about food even while eating and even when we are finished (and it ends only when we are well beyond the sense of satiety, otherwise for the grandmother "nun manciasti nenti!") Aperitif? Brunch? Here there are only three appointments with food: breakfast, lunch and dinner. And I assure you that they are enough ...
Recurring object of the aforementioned chats is the fixed nail of every Sicilian: where to eat the best arancino of Sicily . It would be easier, however, to establish whether the egg or the hen was born before. Because we Sicilians do not even agree on the genre: arancino or arancino? But this is another story ... Each capital has its own tradition (its breading, its type of sauce/meat sauce, etc.) and its parochialism, every rotisserie its... 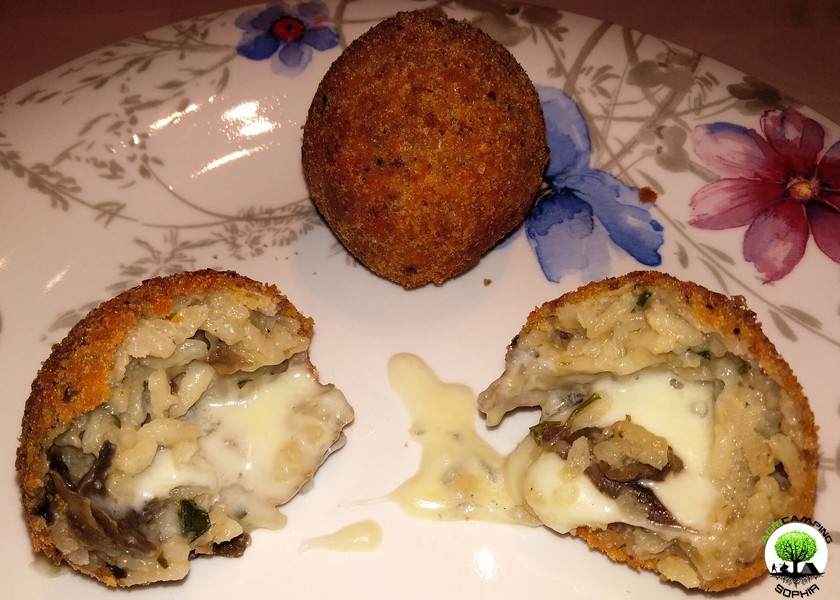 A MY BATTLE HORSE: THE ARANCINI AT THE MUSHROOMS!
I guess it is understood that we dell'Agricamping Sophia with arancini we are just fixed ... I therefore give you 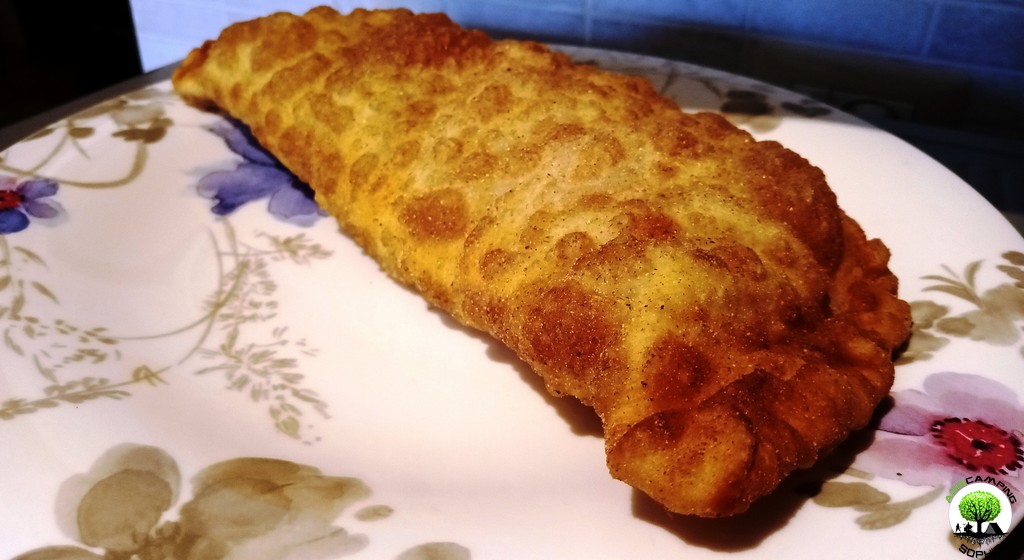 THE PYTHON OF MESSINA IS NOT A SERPENT...
The pitone (or pidone, for purists who would not have allowed themselves to be corrupted by the barbaric vulgarity of the people) is a delicacy that every worthy Messina rotisserie proposes among their dishes.
Unlike the arancino/a which can be tasted in every corner of Sicily (in any case, in different versions and endings), del pitone can be enjoyed almost exclusively near in Messina.
It is, sic et simpliciter, a fried "calzone" with unleavened dough (or rather, without the addition of exogenous yeasts).
The most widespread version on the origin of the name refers to the italianization of the dialectal term piduni, in italian "piedone", since its shape would simply resemble a big foot.
However, the most fascinating and probably correct interpretative key to the origin of the term python has its roots in Greek...
FOCACCISM PHENOMENOLOGY: ORIENTING BETWEEN POOLISH, BIGA AND PROOF
Like a few millionaires of Italians, I am "taking advantage" of this period of forced but inevitable quarantine to test some dough recipes and cooking procedures with a view to improving my versions of some Sicilian leavened products .
A premise is a must: everything that is traditional suffers the limit of being more or less codified and any attempt to introduce an ingredient or to dare an exogenous procedure is mostly attacked and rejected by radical traditionalists. Could this happen for fear of discovering that we can obtain a better version, in our specific case, of focaccia which questions the grandmother's ancient and sacred culinary knowledge? To avoid misunderstandings, this does not mean that grandmothers cook badly, on the contrary ... But that often a little courage is needed, of acceptance that some reassuring culinary certainties...
FOCACCISM PHENOMENOLOGY: AUTOLYSIS OR POOLISH?
Brutally skip preambles and introduction, if you miss it, read the previous phenomenological examination concerning poolish, biga and proof . The aim is, sic et simpliciter, to try to understand, through empirical tests, what are the best ways to enjoy one of the most welcome gifts that mother nature and human ingenuity have made us: the focaccia! What is poolish? It is a preferment prepared with equal parts of water and flour and a minimum amount (as far as I am concerned) of yeast, better if stuffed in the refrigerator ( obviously in a bowl ...), so much the yeasts are active even between 4 and 8 degrees Celsius, for 16 hours (if at room temperature, for much less time but the final quality of the poolish will also be...

REFLECTIONS ON THE MOTHER YEAST AT THE TIME OF THE CORONAVIRUS
Cast the first stone anyone who has never kneaded (at least their first time ever ...) with the penem canis , unloading a whole 25 grams cube of brewer's yeast in half a kilo of flour, as if he had had to leaven the bowl too ... And after a couple of hours (miracle!) find yourself munching with difficulty on the biscuity or chewy result wondering why he didn't even remotely remember a pizza ...The "problem" is that, as already more fully explained regarding the phantom autolysis , if leavening occurs more quickly than protein synthesis , that dough loses edibility and becomes more suitable for alternative uses, for example as glue ...
leavening is not the only chemical and microbiological process that... 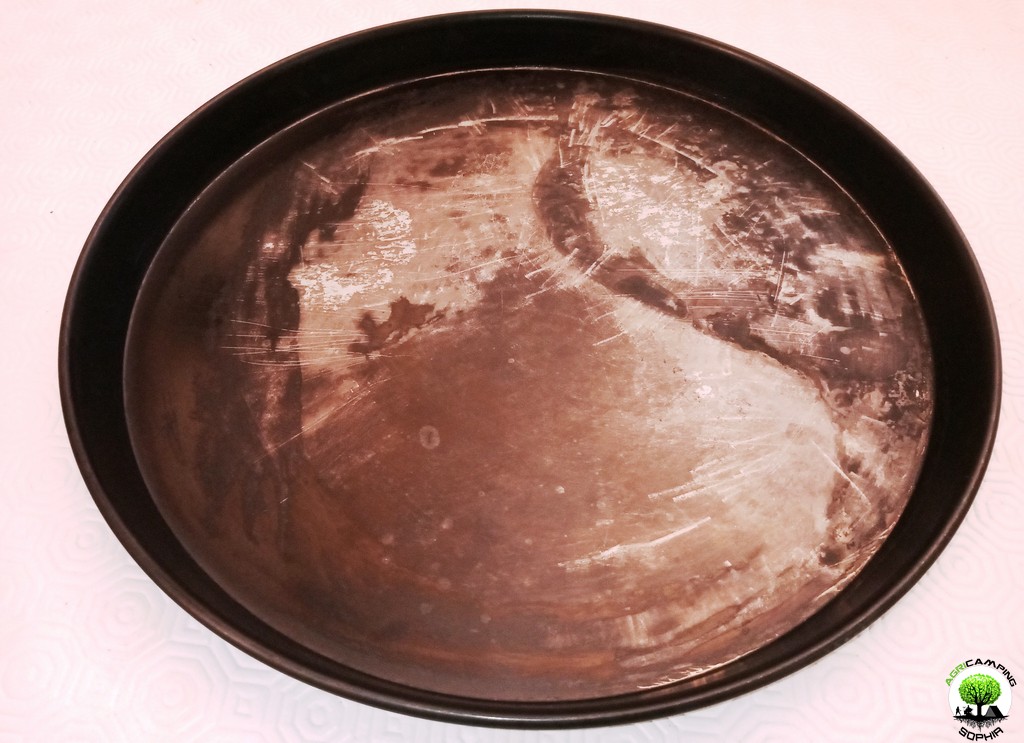 FROM CROCODILE IN NEW YORK SEWERS TO BURNING BLUE IRON TRAYS
If, like us at Agricamping Sophia, you are fond of pizzas in the pan and focaccia, you have certainly received the news or have accidentally read the miraculous cooking skills of the legendary blue iron trays . Out of curiosity, also thanks to the lockdown due to the Covid-19, we purchased a couple, for private use, from different manufacturers. Being aware, through the attendance of specialized forums and the reading of a myriad of articles on the net, of the mysterious burning which should be a preliminary operation necessary to give the green light to their use, we are here uncritically lavished in following to the letter one of the guides found among the first results of Google. The outcome? A lot of smoke, the smell of burnt oil throughout the house and two apparently ruined trays. Immediately consulted the forums we mentioned, the diagnosis is... 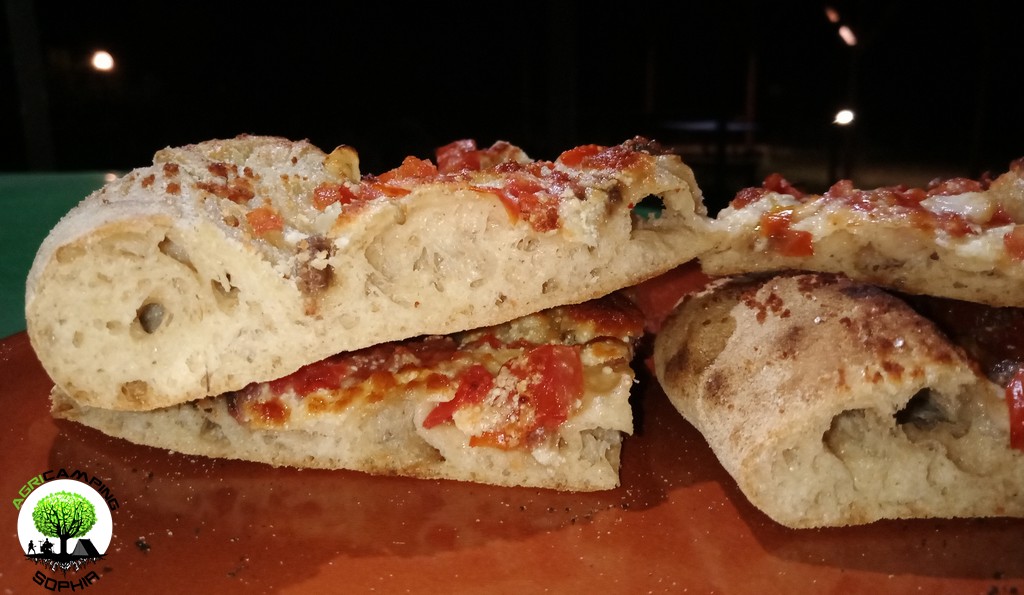 ANCIENT GRAINS BETWEEN OLIVE OIL AND AUTOLYSIS
We are trying to completely abandon the use of non-Sicilian flours for our leavened products, not only for the pleasure of rediscovering those ancient grains that, regardless of the fashion of the moment, our grandparents really used, not only to distance themselves from those standardized flavors that we can now find everywhere, but also because the criteria of wheat production in Italy, unlike the overseas jurisdictions, severely limit the use of plant protection products whose effective harmlessness for man is yet to be proven.
Even if so far we have been supplied by Italian and Sicilian mills, it is obvious that particular strong flours cannot be entirely derived from wheat grown in the Bel Paese, simply due to statistical improbability (given that production in Italian territory of soft wheat covers only 30% of the national needs) and because, for... 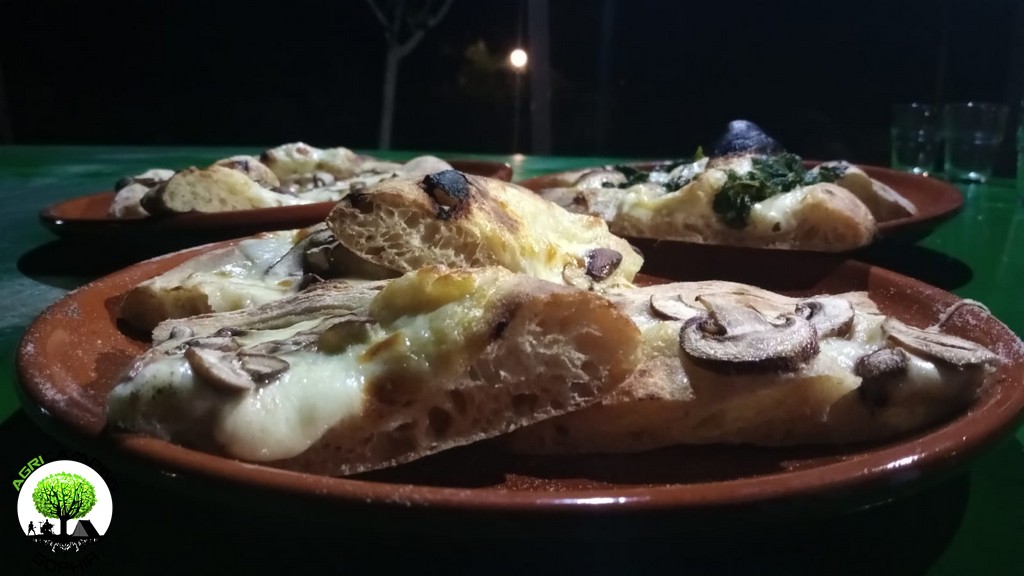